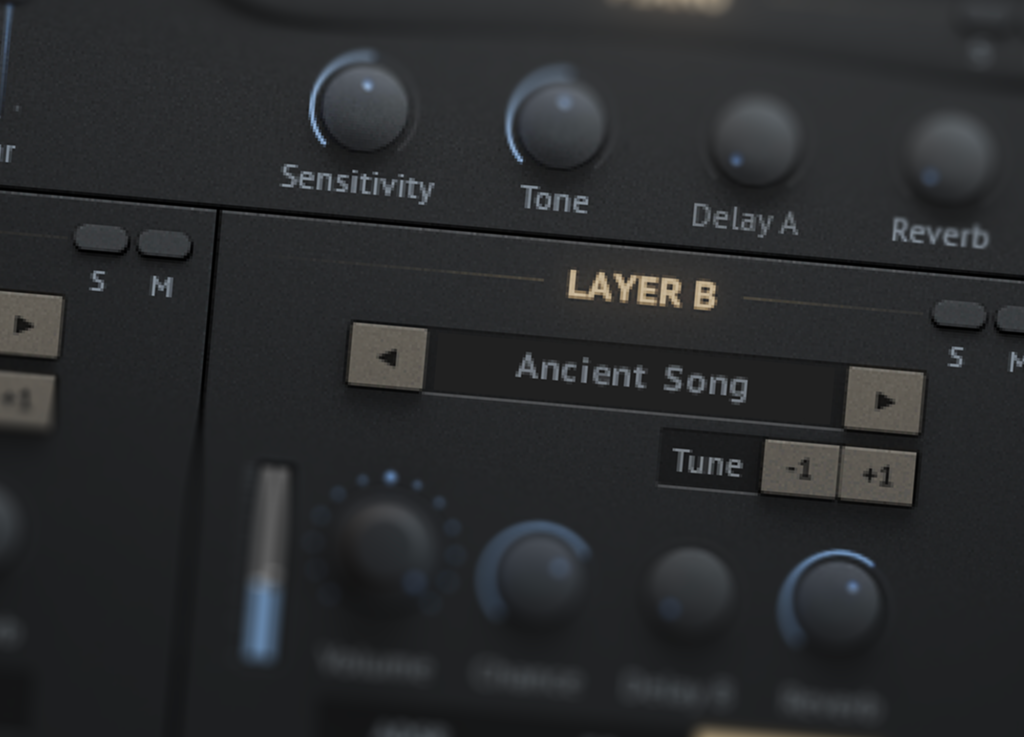 Shatter the stereotypes and traditional orthodoxy of blending the acoustic with the synthetic.
Take melodic musings to concert hall...​
点击展开...

Have you been looking for the best piano samples around? Look no further! Hollywood Piano offers a vast and truly gigantic multisample library of some of the best modern grand piano sounds available.​
点击展开...

All of these best-in-class pianos were painstakingly recorded with countless velocity zones by Manuel Schleis himself, with state-of-the-art recording equipment, and a lot of care, time, and love.​
点击展开...

Enjoy the finest nuances in touch and action with Hollywood Piano, including organic pedal noises when using the sustain pedal.
A variety of unique macro assignments will also empower you to tweak sounds precisely to meet your needs.​
点击展开...

The concert piano - the most versatile and most breathtaking instrument ever made, used in almost any musical genre and decade.
Now you have some of the best concert grands at your fingertips in your VPS Avenger!
Manuel Schleis puts months of work into this expansion pack, elaborate recordings, laborious multisampling and processing of thousands of samples for up to 23 different velocity zones.
You can even setup the string resonances, hammer noises or pedals with the macro buttons.
Explore two vastly sampled Steinway grands and a Yamaha concert grand as well as many bonus content like deep cinematic, house and ambient stuff
all done with pianos, a Fender Rhodes MKII54 or even a real harpsichord.
Strongly recommended is a 88key masterkeyboard and sustain pedal to get the full experience.​
点击展开...

Product Details
Many acoustic guitar sample libraries focus on providing a clean, balanced tone: plenty of body, and a crisp high end.
These qualities are all great if you need a sound that blends in the mix,
but sometimes you need a guitar that brings its own personality to the table.

Presenting Evolution Dry Relic. Recorded using an early ‘50s Gibson J-45,
this is a guitar that’s seen a lot of history, and has plenty more stories to tell.
There’s nothing like the sound of aged wood that’s been soaking in more character with the passing of every season.
Paired with a set of well-worn strings, the guitar has a gorgeous, thunky low end with a spark of life in the highs.
The library is just what you need to give your song a boost in personality.​
点击展开...

Bentside Spinet derives from spinetta, a word used for all quilled instruments in 17th-century Italian.
The spinet was a preferred household keyboard since it took up less room than the harpsichord,
produced a dark & quiet tone, and was aesthetically stunning.
As one of the precursors of the pianoforte, the oldest artifact is dated 1490,
but started to gain popularity around 1631. By the 18th century,
bentside spinets were found all over Europe and were used for daily home entertainment and musical instruction.
The instrument shape resembled a harp laid horizontally, with the keys in the position of the sounding-board.
As a result, the spinet produced a rich and sustained timbre, but darker and less brilliant than the harpsichord.
It had a five octave range with natural keys re-covered with ebony and ivory topped accidentals, giving it a strikingly memorable look.​
点击展开...

From Classical to Latin
Synchron Percussion III is the third and last installment in a series of exquisite instruments, recorded in an extraordinary environment where classic acoustics, groundbreaking technology and professional experience create the perfect formula for excellence.
All instruments of this collection were recorded with a multi-microphone setup in Stage A of Synchron Stage Vienna, giving you all the sonic flexibility you can imagine in a percussion library, from pure and pristine touches to heavily processed outbursts.​
点击展开... 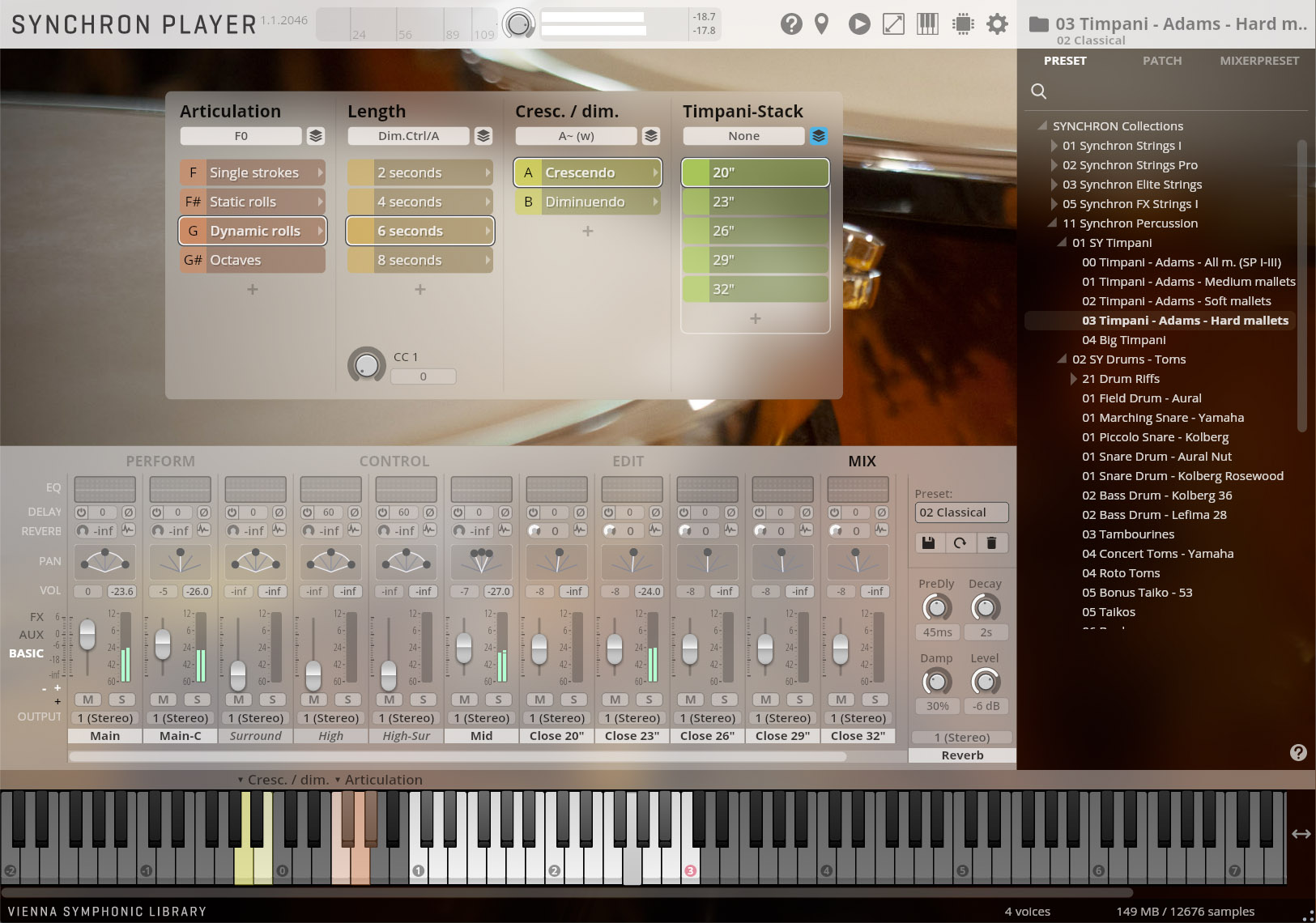 WHAT'S NEW
Since Falcon’s initial release we have been committed to keeping it fresh and innovative.
Listening to our user’s experience and feedback, we regularly add new factory content, modules, enhanced functionality and optimizations for FREE.​
点击展开...

This unlikely studio, to which bands like Queen, Rush, Judas Priest, Hawkwind
and many of their contemporaries in the 1970s pilgrimaged,
became a creative haven where some of the best rock songs of our time materialized.
But even beyond the heydays of classic rock, Rockfield has...​
点击展开...

Kageyama Taikos
Taikos have been an essential part of traditional Japanese music for thousands of years.
Their deep, resonant, yet crisp sound is unmistakable, whether played solo or as part of a massive ensemble.
In the last century, their prominence has risen far beyond the borders of Japan, appearing in major film & television scores, video game soundtracks, and international events.
We wanted to devote a sample library entirely to taiko, with several accompanying percussive instruments, played by a master to open up as many options for inspiration as possible.​
点击展开...

We brought these drums out of the more common ensemble or concert hall setting, focusing...​
点击展开...

Reverberate has been updated to v3.2, it's available to download right now from the downloads page!
In this update you will find a new contouring tab. It is perfect for simple reverb time editing jobs that before required the use of envelopes and cropping tools.
What's more it's now a cinch to dial in those high and low reverb time adjustments above and below crossovers as you are already familiar doing in regular algorithmic reverbs to tame low rumble or turn up the sizzle of a reverb's frequency high decay.​
点击展开...

It's a FREE BASS VST with 3 sound categories (Synth Bass, Electric Bass, and Acoustic Bass)
suitable for any music genre and for all Music Arrangers and Music Producers!​
点击展开...

Monster Bass is a complete Bass solution for the Low Frequency that your music needs!

It’s a FREE BASS VST with 3 sound categories (Synth Bass, Electric Bass, and Acoustic Bass)
suitable for any music genre and for all Music Arrangers and Music Producers!

It’s a ROMpler VST, meaning it’s a simple sampler without too many parameters,
just a simple and basic one like Filter, ADSR, Glide knob, and a simple LFO!​
点击展开...

Make more of the music you love, without having to worry about how to get your ideas into your DAW.
Dubler 2 transforms your voice into a real-time MIDI controller,
allowing you to write music at the speed of thought.
If you can sing it, beatbox it, hum it, or whistle it— now you can play it.​
点击展开...

1. Quickly sketch out musical ideas
Got a melody in your head, but don’t know how to play it? Instead of recording your latest melody in a voice note,
you can now hum, or sing that idea straight into your DAW with real-time voice-to-MIDI notation.​
点击展开...

Sometimes inspiration comes at you thick and fast... but sometimes not.
Instacomposer is your saviour when creativity runs dry, or when you just need your talent topped up.
This MIDI generation plugin can conjure melody, rhythm, bass, pads and chords at the click of a button
- all using artificial intelligence to create genuinely useful and musical riffs.
This is the next step in automatic composition, using a complex algorithm to determine notes, harmonies and chords based on your personal preferences.
With this much composing power at your fingertips, you’ll never be stuck in a musical rut again.​
点击展开...

Artificial Intelligence
The backbone of Instacomposer is a behind-the-scenes...​
点击展开...

The British Console Sound is famous. You can hear its sweet and musical quality on hit records spanning more than five decades from artists such as Queen, Nirvana, David Bowie, and the Red Hot Chili Peppers.
When mix engineers need this unmistakable body, depth, and silky sweet top-end on individual tracks and busses, our British Class A channel strip is the one to grab.​
点击展开...

We modeled Gate, Compressor, EQ, Filters, and Drive on some of the most sought-after and costly console modules in existence using our renowned emulation methodology.
The result is the authentic tone and character of the classic British consoles with superb sound quality and four flexible formats: native plug-in, Console 1 channel strip, and Amp...​
点击展开...

Handmade in Los Angeles by Jeff Turzo, Overstayer is something of an underground phenomenon.
Turzo started out making gear for his personal use, but word of his exceptional designs spread like gossip down Sunset, and in 2009, Turzo gave the people what they wanted.
Overstayer Recording Equipment was born and created a near-fanatical following amongst the in-the-know pro audio crowd.​
点击展开...

All the samples included in Elements were created by recording organic sources, acoustic instruments, and particular environments.​
点击展开...

Providing you with 3 powerful Layers, Elements is a unique wavetable Hybrid Synth.
It has a huge wave-rom of over 23Gb and comes with an incredible array of useful sounds specifically developed for sound designers, and soundtrack...​
点击展开...

World Colors Clar-Duduk
Welcome to our first 'Colors' entry 'Clar-Duduk'. Clar-Duduk is a cross between a clarinet and the Armenian Duduk.
Its warm worldly tones set in motion the beginning of a broader goal to see what could be created with minimal kontakt scripting.
The key to this experiment was to have a little bit of fun in the studio and push the sonic mojo to 11!​
点击展开... Inspire to Create
This instrument is not part of a bigger library. It was created as an experiment to inspire the idea that anyone can create a fun and useful instrument for Kontakt with out any...​
点击展开...

Evolution Series presents Chronicles Bukhu
In collaboration with Mongolian composer and one of a kind talent Bukhu Ganburged Evolution Series introduces another chapter of inspiring sounds.
With state-of-the-art equipment, a world-class scoring stage they recorded voice and horse fiddle.
This combination of movement and textural based performances evokes a raw and human quality.
The beauty of Bukhu’s voice matched with horse fiddle opens a doorway to the early 13th century.​
点击展开... 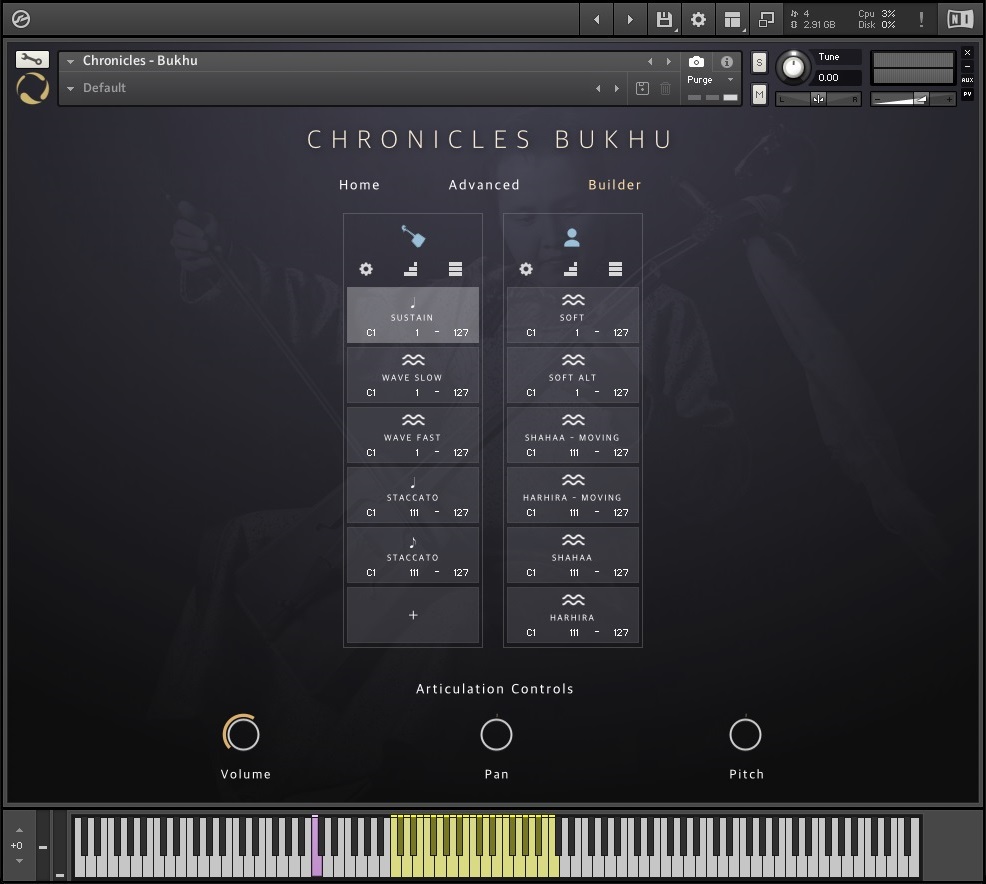 Echoes Of The Past
Stardust 201 Tape Echo is a hot-rodded interpretation of the classic Roland "Space Echo" tape echo effects of the 70s and 80s.
Compared to earlier tape echoes, they represented a giant leap in reliability and sound quality.
With solidly built tape-transport mechanisms and the inclusion of a spring reverb and chorus effects in some models, the Space Echo was truly groundbreaking with its fantastic variety of sound colors.​
点击展开...

Stardust precisely recreates the limited fidelity and stability of audio tape, providing a natural rolloff of bass and treble...​
点击展开...